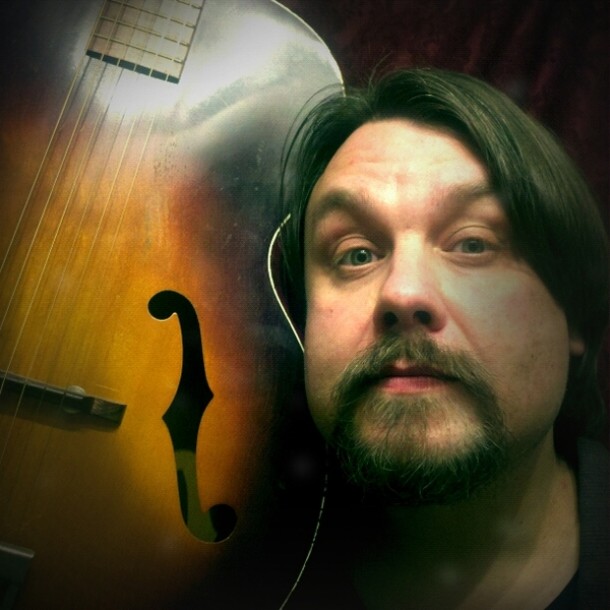 Musician/Songwriter Glenn House has a sturdy foundation amongst the roots of American music. For two decades he has been writing and performing original music built from such styles as folk, blues, bluegrass, rock n’ roll and old school country. Merging these various genres he has constructed his own modern sound while still giving a respectful nod to his traditional influences.  His 2012 solo debut, Doublewide Vision, begins another chapter of eclectic song writting steeped with lyrical metaphor and innovative twists. This recording captures this new sound drivin by his finger picking ragtime guitar style, but also reflects on both of his previous projects, Grasshoppah (progessive bluegrass) and Karmic (folky alt.Country)
A self-taught left- handed guitarist, his approach involves playing a right-handed guitar (not restrung) left-handed (upside down). This technique has evolved from primarily a rhythm player to an improvising soloist and avid flat-picker. The more recent addition of a thumb and finger picks was inspired from the legendary Elizabeth Cotten and her signature alternating bass style also known as “cotten picking”. This position requires the fingers to play the bass lines and the thumb to play the melody.
Born and raised in Grand Rapids, MI Glenn started playing drums at a very early age and by the time he turned 16 he was playing the local blues club in (primarily) a Grateful Dead cover band,   During this time he was also learning to play guitar and formulating his own song writing. In 1992 (his senior year of high school) he started the band Karmic releasing there first album which was an all acoustic folk rock sound. Over the course of 8 years, a couple more albums, and many incarnations of every other member besides himself, the band transformed into an full on electric jam band. Eventually becoming part of the Homegrown Network, they toured the midwest and the east coast extensively.
In 2001 Glenn began performing solo as what some have referred to as a simultaneous instrumentalist, playing bass drum and highhat with his feet while playing guitar and singing or adding harmonica solos. This was inspired by the one man band stylings of Jesse Fuller, a famous street performer from the bay area. With the addition of a bass player and a mandolin player this acoustic trio came to be known as Grasshoppah and they played everything from old traditional bluegrass songs to Charlie Parker along with a long list of original tunes. In 2002 they won best album and best folk album of the year from  WYCE’s-Jammy awards. In there true festival form they became a quartet with the addition of a flute/sax player and had the honor of performing with the legendary fiddle player Vassar Clemens at Blissfest in the summer of 2004. He has also shared the stage with Richie Havens, Jonathon Richman, Merle Saunders, Leftover Salmon and The Samples to name a few.
Above and beyond these unique multi-instrumental, upside-down and backward techniques Glenns performances have a heartfelt delivery and genuine character.