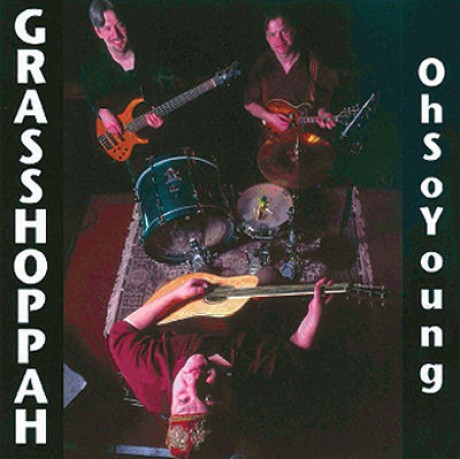 Grasshoppah is a three-piece band (sometimes four-piece), originally from Michigan. Glenn House on guitar, drums, and harmonica, simultaneously.  Brian on acoustic and electric mandolin.  Chris Carr on electric bass.  Original music that canvasses bluegrass, folk, and funk. Starting in 2001, Grasshoppah has steadily increased their schedule of live shows, including all of Michigan and the midwest, Colorado, even frequesntly touring Alaska almost every six months. In 2002 Grasshoppah put out their first studio album titled Oh So Young. Later that year, to no one’s surprise, they walked away with the coveted 2002 Folk Album of the Year and well as the 2002 Album of the Year for the annual Jammie Awards sponsored by radio station 88.1 FM WYCE in Grand Rapids, MI. Their consistent performances have also earned them a growing reputation of a great band to see. Grasshoppah’s original material consists of diverse influences from folk, rock, funk, blues, island, and bluegrass, sometimes staying in a certain style for a song, sometimes changing styles within the composition. This mixture of catchy lyrics and intense instrumental jams lends to remembrance. Grasshoppah’s main musical influences would be Bluegrass with an injection of pure Funk mingled with classic traditionalism. Throw in a bit of Reggae, Folk, and Blues and you’ve got it. The set lists never fail to diversify even if some of their songs have roots so deep the original artist isn’t known. Musicians that especially lie heavily on the brains of Grasshoppah might include Jethro Burns, Jerry Garcia, Stevie Wonder, John Hartford, David Grisman and even David Lee Roth!