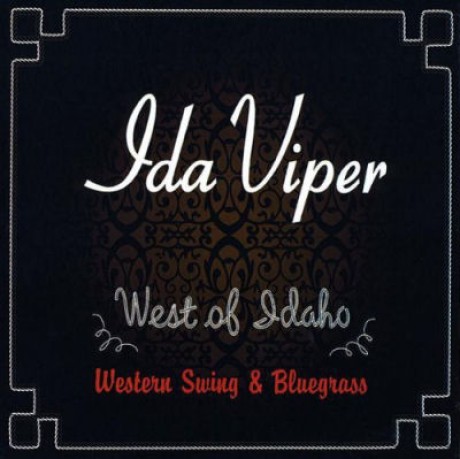 Mark Petteys and Brian Oberlin first played music together on the streets of Southeast Portland, Oregon in the summer of 2005. They quickly discovered a mutual enthusiasm for swing, jazz and bluegrass. During that fall they recorded a duo CD, Some of These Days, as Ida Viper. Since then, they have performed and taught workshops from Idaho to Pennsylvania, and California to Alaska.

“These are some very tasty tunes from an Oregon trio that’s been tickling the strings for only about three years. When Brian Oberlin (acousic & electric mandolin) and Mark Petteys (guitar, banjo) first met on the streets of Portland in 2005, they realized their mutual affinity for jazz, swing and bluegrass. Both award-winning instrumentalists enjoy the adventure and challenge of tightly presenting eclectic offerings. In 2006, Russ Baker started playing upright bass with Ida Viper, and this recording project enlisted the phenomenal, silky smooth bow work of renown Seattle-based fiddler Paul Antastasio on five cuts.

Ida Viper’s second CD, “West of Idaho” is a perfect and illustrative display of their charisma, character, and musical courage. Their sheer exuberance and energy draw you right in from the opening salvo of “Idaho” to the closing proclamation of “Don’t Fence Me In.” Like a good book, the boys clearly establish the musical setting. The band’s character is defined by elements of boundless hot licks performed in well-conceived arrangements. Twelve of the 14 cuts also feature vocals, but only five songs (The Whole World Round, Miss Molly, I Crept Into the Crypt and Cried, My Window Faces the South, Don’t Fence Me In) include Petteys and Oberlin harmonzing together like a couple of brothers from the 30s or 40s. Russ Baker’s sole vocal number is their bluegrassy banjo-driven rendition of “Don’t Think Twice, It’s All Right.” Baker has a nice voice, and they might consider working up some trios. Ida Viper gets high marks for musical chutzpah because they’re willing to cover so much territory from Bob Dylan to Frank Wakefield and Cole Porter to Thelonious Monk….and they do it all so well in their characteristic and personalized Ida Viper way.

Oberlin demonstrates his songwriting ability with “Carbondale,” an ode to Colorado “the G-spot of the universe.” “Gricklegrass” is a great showcase for Petteys’ expert banjo picking, and who would’ve thought that he could masterfully play a Monk tune (“Well You Needn’t) on the ol’ five-string? I would’ve enjoyed a little more of Anastasio’s guest violin in the mix, especially at mid-set with “Hillbilly Blue” and “Time Changes Everything,” but that’s only a minor suggestion. “West of Idaho” sends a clear message that this entertaining, hard-working, courageous trio is building a big reputation (and fanbase) for themselves way out in the western territory. Both inspired and inspiring, Ida Viper can count on me as one of their biggest fans too. (Joe Ross, Joshua Tree, CA)”